As we consider the Biblical account of the birth of Christ this Christmas season, I have been pondering several elements, specifically related to Mary, the mother of Jesus. The more I consider the account of Mary in the Christmas narrative, the more I am astonished by her response and obedience.

Luke 1-2 provides the backdrop of the story, but the passage I want to focus on is what has come to be known as, “the Magnificat” or “Mary’s Song.”

The context of these words of worship surround Mary having gone to visit her relative Elizabeth, where she stayed about three months, until Elizabeth gave birth to John the Baptist. Mary has just greeted Elizabeth who excitedly discerns Mary is carrying the coming Lord and Messiah. Mary then responds with this song of adoration.

Looking carefully at the words of the song (Luke 1:46-55), we can divide its contents into two categories. Verses 46-49 are personal reflections from Mary on the goodness of God directly related to her. While in verses 50-55 she broadens the adoration to include the big-picture, redemptive purposes of God in and through the One she is carrying.

In verses 46-49 Mary lifts her voice with confidence in her Savior and what He is doing. She declares that God has “seen” her, regarding her low state, yet valuing her anyway. Mary is filled with confidence that God prioritizes the lowly, meek, those without status. She is only about 15 years old here as she discerns such monumental truths.

Mary declares that “He who is mighty has done great things for me.” Let’s grasp the significance of this statement. Mary was born into a Jewish society oppressed by the Roman Empire, poor, without status. Some scholars suggest the name “Mary” was very common in those days because it meant “bitter.” Any female born into that society would likely have a very “bitter” existence with no rights and little protection, security or hope of anything changing.

Yet, she confidently praises, “He who is mighty has done great things for me.” Mary is seeing things from a divine perspective and not merely a natural one. God had previously encountered her with an angel, promising that she would be the chosen vessel to bring the “Son of God” into the world.

Verses 50-55 are what really take the narrative forward. Mary exuberantly declares the big-picture promises of what the birth of the “Word made flesh” means in the world. In these verses, we find the entire redemptive process of Jesus highlighted. Jesus came reconciling humanity to God as the “Lamb that was slain” in His first coming and coming as a reigning King, overcoming all those in opposition, in His second coming.

Remember, Mary is only about 15 years old. Yet, she displays an extraordinary clarity as to the overall redemptive plan of God from the Old Testament prophets, applying it all to the coming forth of her beloved Son. What she describes refers partially to Jesus’ first coming, which she is witness to, and ultimately also to implications surrounding Jesus’ second coming.

Mary is worshipping God using the very truths of what the prophets declared Messiah would accomplish throughout history. Though she uses a verb tense related to things that have already happened, she is in fact declaring things which in their fullness were yet to come.

By doing so, Mary is expressing confidence in God’s future agenda. Though despair and difficulty consistently surrounded Israel during that time, Mary sees her people’s circumstances are not the end of the story.

There is a bigger picture agenda that God will accomplish through the precious child in her womb. What Mary doesn’t likely understand is that most of the things she praises God for will not take place in fullness until the end of the age, through Jesus’ second coming.

Mary is getting the ball rolling of which Jesus, when He starts His ministry, will continue. She is a forerunner of the message of the Kingdom of God, the same subject Jesus talked more about than any other. Jesus used the phrase Kingdom of God over 100 times.

The Kingdom of God, in its simplest definition, is the rule, reign and authority of God in the world, the sphere in which His rule is exercised. God’s rule and reign is experienced by human beings and communities through entering the Kingdom of God today as well as in the future (Matthew 8:11, 25:34; 2 Peter 1:11).

Jesus’ reign creates both a present realm (Matthew 21:31) and a future (Matthew 8:11; 1 Corinthians 15:50) where believers experience the power and blessings of God. God has inaugurated His Kingdom (His manifested reign and will) in this age through the life and work of Jesus in the flesh, and Mary is anticipating this in her words while also looking to the fulness of that coming Kingdom farther in the future.

This makes the Kingdom of God available now to all in the present (Matthew 12:28). Yet, that Kingdom will not be known in fullness until Jesus’ second coming in power and glory (Matthew 13:41-43, 24:29-31). God is never fully working only for the present but ever has the future fullness in mind as well. This is precisely what Mary is considering in verses 50-55.

This Christmas season let us also not be overly concerned with the baby in the manger. Instead, raising our sights with Mary to the glorious, history spanning and revolutionary realities of the Kingdom of God brought forth through this precious baby. May we pray in response, “Your Kingdom come, your will be done on earth (among all the ethnic peoples) as it is in heaven,” and “Come Lord Jesus!!!” 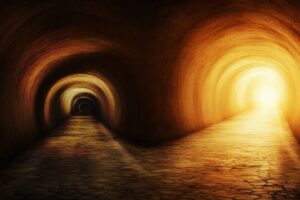 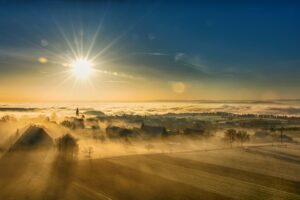